ScampaK  gives you the tools and information to fight the fraudsters at their own game. 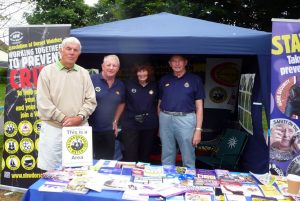 ScampaK contains information on how to deal with current scams plus a number of crime prevention items including credit card RFID blockers, Police style notebooks and pencils, identification magnifiers to check the ID of callers at your door and for reading the small print on contracts before adding your signature, door stickers ‘WE DO NOT BUY FROM DOORSTEP SELLERS.’

For more information or to order a ScampaK or to book the team to talk to your group:-

The North Bournemouth Crime Prevention Panel (NBCPP) launched the pilot project on the 19th February 2015 at Townsend Community Centre as part of the Dorset Police Crime Commissioner’s Open Day, owing to the enormous number of scams, both reported and the large number of unreported crimes coming through the NBCPP helpline 01202 241380.  We initially targeted Strouden Park,  Queen’s Park and Charminster together with the Townsend Safer Neighbourhood Team (Project Leader Anna Lillywhite), Jennie Glover (Castlepoint Natwest Branch Manager) and the NBCPP Team.  We have since expanded the project across Bournemouth and other parts of Dorset, as we were delighted to be awarded a DPCC community grant for 2016/2017.

Bournemouth Borough Council Community Safety has been most generous in supplying the initial start- up funding for the packs and many Councillors have continued to do so together with Bournemouth North Rotarians. 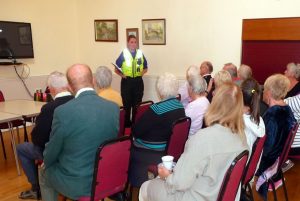 ScampaK is coordinated and led by NBCPP liaising closely with the Dorset Police Neihbourhood Inspector who is head of the Panel & the Neighbourhood Policing Teams (NPTs) and latterly by Sgt Jon Wasey, after Insp. Andy Edwards was transferred to Poole.  Monitoring and evaluation of the effectiveness of the project is also being carried out over the year, using questionnaires at all the talks given by the Op Luna/ScampaK team, whose members have been trained by PC Andy Pasker.  We have developed the packs to be given out with a personal visit and explanation to those who have already suffered from scams, in order to stop repeat victimisation, which we have found is happening on a regular basis.

ScampaK will also be available and distributed to all age groups who are identified through our NBCPP helpline and during the visits and talks at various venues.  Also referrals from  N.W. Coordinators, ageuk, Help and Care, Councillors’ surgeries, Victim Support etc.  We are also making sure that information posters will be displayed in all outlets in the area from Hairdressers to Doctors’ Surgeries and Vets.

The packs contain easy to access clear information on scams and how to stop and deal with telephone and internet crime and how to systematically check your bank statements and make sure you do not become a victim of internet banking fraud or other cyber crime and of course not to mention unscrupulous ‘doorstep cold callers.’

Also included in the packs are Police style black notebooks and pencils to note down relevant information including telephone numbers.  Small magnifiers to check ID of callers at the door and small print on contracts.  Scan proof metal credit card holders, small personal attack alarms (which have a number of uses from avoiding purse dipping etc).

Our team has already distributed over 945 packs individually, making sure that each recipient has ongoing support, where needed, instead of falling into the trap of so many quick fix projects, where loads of leaflets are given out to tackle certain crimes with very little result. 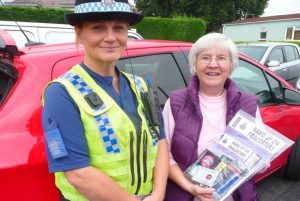 a huge number of bookings for clubs and coffee mornings to give talks and raise the awareness of the dangers of being scammed.  Feedback has been very good so far, but we will continue to improve our approach over each year.

The main thing is listening to the community and hearing their ideas and experiences and have an interactive audience. People then feel part of the overall process in the fight against fraudsters.   Note – Bank accounts are more likely to be targeted by criminals than your home, now.  Burglary has become ‘not worth the trouble’ as householders have become more and more security conscious.  Criminals find it is far more remunerative work online.

Working for a Safer Bournemouth 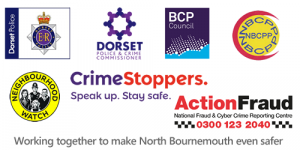