Giving back East Howe Churchyard to the community 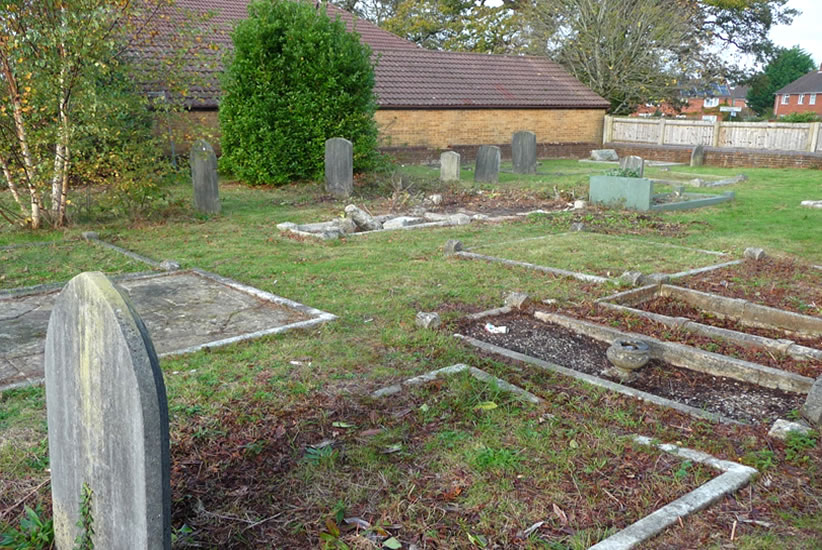 The Community took back control following vandalism and flytipping:

Cllr Dennis Gritt, Alan Keeping, Ted Taylor and Deirdre Redstone went down to see the East Howe Graveyard after it was reported at a Panel meeting that a portaloo had been put in the middle of a grave!  Dennis dealt with the matter and it was removed.  It was immediately obvious, as we looked around, that the churchyard was a hidden little historical gem which was being used as a haven for drinking and drugs and a dumping ground for household rubbish.

Mobile toilet left on top of grave by ‘callous pranksters’

As a Crime Prevention Panel, with the permission and support of Graham Barber,we decided to do something about it, as follows:

The site was overgrown with brambles, trees growing out of the graves and it had been used as a dumping ground, drug taking and drinking and totally disrespected. In fact we were faced with a daunting task and a jungle to clear. One particular edifice at the end of the churchyard looked just like a tree, until all the ivy was carefully pruned apart to reveal a very large memorial edifice by Mike Mooney and his Youth Offending Team . The Community Pay Back Team also helped initially with the heavier work and strimming the grass ,, which was wonderful in order to find where all the graves were hidden. We found the grave of ‘Bessie Still’ in the middle of a bush and several unmarked graves that were not listed on the church records. Thanks to Rodney Haskell and his research into all the old Kinson/East Howe families, we have now identified all the graves listed, plus three extra burials.

Thanks to all the hard work by the volunteers and the local community who have given up many hours to help and the young people in the Youth Offending Team, we have managed to reach our target of making a huge difference before the cold weather sets in. We still have a great deal to do, but it is really marvellous that so much has been achieved since the middle of August 2014.

Clearing all the rubbish from the site

Ian Sherwood Assistant Manager of SITA  has arranged  for  two skips to be delivered to the churchyard and collected when full, which is absolutely marvellous.

Manager of YOTs and Leader Mike Mooney by the edifice cleared of ivy.

Thank you to Tom Southam NBCPP for using his trailer to take all the sacks of tins and bottles cleared from the churchyard to the tip and also loads of greenery.

Some of the tools donated for clearing the graveyard

A load of tools have been provided by NBCPP from loppers, grass and hedge clippers, forks and trowels with donations by Alan Keeping forks and spades, Ray Cozins pruning saws and hand forks and trowels and Hazel Thorby who bought a bow saw.
Also special thanks to a group of older ladies from sheltered housing flats who have kindly donated some extra edging tools and heavy duty black plastic bags for all the cleared greenery and rubbish.

Everything is being used, but we are going to save for a heavy duty strimmer in the spring or possibly ask the Bournemouth Borough Council Parks Department to help us when they are trimming the grass verges. We find, though this is not an option, as the churchyard is classed as private property.

Bird boxes are being made by the young people involved in the project and will be put in place ready for the Spring nesting time.

Golden Acres Nursery provided a load of bulbs for naturalisation in the churchyard. In the Spring it to looked really pretty, as well as attracting wildlife i.e insects, moths and butterflies and over time they should spread to form a carpet of colour.
This is the list of bulbs that Neil Rogers at Golden Acres gave to the project. He lives just by the Churchyard and did not know it was there until recently, as it was completely hidden and overgrown.

United Reform for the South of England

Graham Barber who is in charge of United Reform Church property for the South of England came down last week to see how we were getting on and he was amazed and delighted with what the team had achieved. He has promised to erect really good quality substantial double gates, (on the lines of a lych gate), which will look really good. He will also make sure the path is extended for disabled access. We can then think about a couple of well secured ground anchored seats.
Bourne Academy Art Department designing the entrance gates 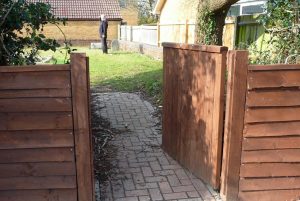 The very talented students in the Bourne Academy of Art Department have undertaken to design the double gates for the entrance to East Howe Churchyard. The best design will be will made and erected by the URC, who are also giving a prize. The entrance gates will be the finishing touch to bringing this lovely little churchyard back into the community and make sure it is respected for the future.

The community has now regained control over this area

The NBCPP/NW/NPTs and the community have ensured that anti social behaviour, rubbish dumping and drug taking has gone from the area and the young people have continued to take an interest in the churchyard, as many of their ancesters are buried there and it has spawned an interest in local history. If a place looks like an overgrown rubbish dump, people will naturally add to the wreckage. Sadly, it is unbelievable that householders who had lived in the road for some years had no idea it was idea it was actually a churchyard. ( Fenced panels newly fixed by the young people).